Conversation Series is part of Foundation’s onePULSE Academy, which is committed to positively impact change at the individual, group and community levels 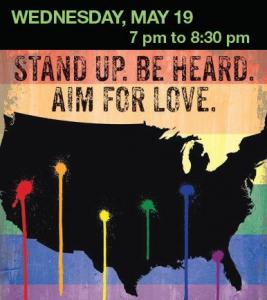 onePULSE Foundation, the not-for-profit established following the June 12, 2016 tragedy to honor and preserve the legacy of those killed and to create a sanctuary of hope, today announced its free virtual film screening of the editor’s cut of the documentary, Disarm Hate, which takes place on Wednesday, May 19 from 7 p.m. to 8:30 p.m.

“We are thrilled to partner with director Julianna Brudek to showcase her important work and to have courageous conversations with the panelists following the short film screening,” said Dr. Earl Mowatt, vice president of education at onePULSE Foundation.

Directed by Brudek and narrated by the iconic actor Harvey Fierstein, the film chronicles nine diverse LGBTQ+ activists who come together after the Pulse nightclub tragedy to join Jason P. Hayes, a hairdresser, and an activist from New Jersey who is on a crusade. Without political experience, Hayes builds a national rally to demand LGBTQ+ equal rights, fight the NRA, and challenge America’s obsession with gun violence. The ﬁlm seeks to create awareness about gun violence against the LGBTQ+ community following the 2016 Pulse nightclub shooting in Orlando.

“It means the world to me to have the onePULSE Foundation, an organization that is championing a permanent memorial for the victims and families of this senseless tragedy help promote the film’s screening,” said Brudek. She added, ‘It is a natural fit as my film is also meant to educate, inspire, and pay homage to the victims and their loved ones.”

The panelists include Jason Hayes, founder of National Rally Disarm Hate in Washington D.C.; Filmmaker, Julianna Brudek; Cast member, Alexis Sanchez, Vice Chair of the City of West Hollywood; Executive Producer and cast member, Ashlee-Marie Preston, journalist and activist, the first trans woman to become editor-in-chief of a national publication, Wear Your Voice Magazine, and the first openly trans person to run for state office in California; Vic Gerami, American journalist, LGBT activist, host and producer of the radio show THE BLUNT POST with VIC and the editor and publisher of The Blunt Post.

To RSVP for Disarm Hate, please select this link: https://bit.ly/3g7pfPu

Sign up to receive exclusive updates about the onePULSE Foundation.

Find out the latest from the onePULSE Foundation, including important milestones and announcements, as we work to create a sanctuary of hope.